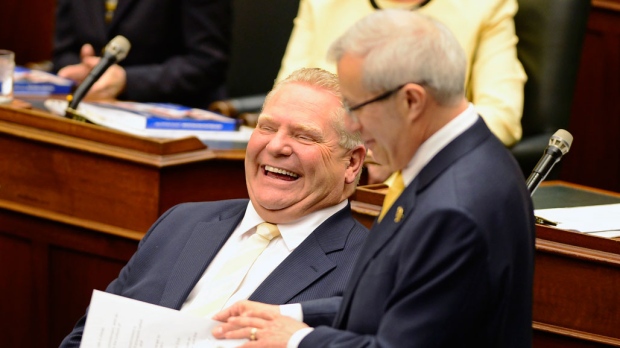 Those who consider themselves proponents of small government and, supposedly, markets, are often too excited at the possibility of any form of fiscal conservatism occurring at any level of government, regardless of what solution (or lack thereof) is presented in lieu of that spending. What this means is that the conversation that remains between so-called fiscal conservatives and progressives is whether to shrink or grow a spending pipeline and network, and rarely is any serious conversation about the necessity, viability, outcomes, and structure of the spending pipeline and network had.

Take, for example, the bravado surrounding the rise of the Progressive Conservative Party of Ontario to forming provincial government. Fiscal conservative rhetoric (which continues today) that focuses on a mess of deficits and debt left by the long-term governance of the Ontario Liberal Party, mixed with the right amount with “for the people” populist sentiment, propelled Doug Ford and his party to a win of the majority of seats in the Ontario legislature.

Proponents of “small government”rejoiced, and the party still feels that they are on track towards a balanced budget and paying off provincial debt. Some still feel that the cuts aren’t deep enough.

So, as the Ontario public’s taste for rhetoric changes and the pendulum of progressive-liberalism on the one hand and fiscal conservatism on the other hand swings from the former back toward the latter (a cycle within a narrow spectrum of selection and debate too familiar to those in America and Canada), we get treated to much of the same story — nice-sounding terms and phrases  like “operational efficiencies,” “cost savings,” “reigning in spending,” and so on.

With the case study that is the current government of Ontario, it’s interesting to look at what the public narrative really is when it comes to talks of cuts to public spending. Take the discussion around the public education system for instance. What it’s ultimately about is merely removing money from (and moving money around in) what is being called an already “broken” system by Ford and his party.

So, the public is treated to political sparring between the parties about increasing class sizes, the number of teachers that will have jobs, the removal of subsidized university tuition for low-income university students, the cutting of summer programs, and so on.

Those who like the current system are obviously panicking about any cuts. Those who say they are all about fiscal restraint and small government are celebrating them.

If all you care about is the government spending less money, then this is certainly something to celebrate.

Those who are genuinely interested in discussing and considering solutions to important problems that aren’t government driven shouldn’t be celebrating — at all.

Mainstream fiscal conservatives will rarely start a conversation that would address the major structural and institutional changes that would need to happen in the public sector to create the opening for civil society and the private sphere to even begin a first attempt at solving serious problems.

With the door for serious alternatives to institutions and services that people are benefiting from remaining shut, you’re simply left with a matter of accounting and paperwork — certain politicians try to get the government to spend less than X on the current systems to achieve Y long-term financial result.

The result of cuts without alternatives is that the public systems, which of course aren’t being gutted entirely, head in the same direction they always have been, but with more of a limp.

It turns out that causing a public system to limp without allowing alternative solutions has serious, everyday effects on people.

In Ontario, most students go to public schools (i.e., publicly funded schools that require no out-of-pocket tuition to attend), and unfortunately, most parents don’t have much an alternative to that system other than turning their lives upside down to enroll their children in a private school — a decision that would come with completely out-of-pocket yearly tuition that could average between $13,000-$23,000 per year.

A potential alternative to this entire system would be to get rid of the public school system structure (as it stands) in Ontario altogether and open up a “market for education” by creating an environment where it would be more viable to open up more private schools. Parents would then be empowered to make very specific decisions on the kinds of educational institutions they’re trusting their children to.

Student tuition to these private schools could be partially or completely funded by education vouchers (essentially tuition coupons that parents can choose to apply at whatever school they wish). The idea, on the one hand, is that an environment where schools compete for your enrollment will create a situation where suppliers of education are in a race to improve their service and the conditions of their schools, and it’s up to them to manage their revenues in an efficient manner.

Is this example too simple? Are there a bunch of political reasons that aren’t considered here that make this unfeasible? Maybe. However, the intent here isn’t to completely sell you on the idea of education vouchers, but rather to demonstrate that a discussion on alternatives to public policy problems can aim to create solutions that should improve on overall outcomes (in this case, education quality), increase family decision-making power (with an actual choice), and address or improve the condition of a public purse.

Contrast this with the mainstream fiscal conservative bargain of keeping virtually the exact same institutions in place, cutting their funding, and abstaining from providing the public with any alternatives to current arrangements. Then, when a public institution faces the inevitable struggles and problems that naturally come with a funding strangulation, we move on to useless discussions that involve things like blaming unions and the salaries of teachers for financial troubles and declining quality of output.

Whether it’s K-12 education, general healthcare, mental health services, or any other public program that can make people’s lives better, it is impossible to overstate how important it is that any conversation on the reduction of government spending should necessarily be tied to new policies and solutions that, when implemented, will ultimately increase the options that individuals and families have available to them as alternatives to the public programs that are already a part of their lives and may be assisting them.

It is crucial that people are free to choose how to live their lives in a way that they think works best for them. This kind of independence is only a possibility if there’s an ever-increasing number of options available to them for selection, and opportunity for them to choose them. The narrow spectrum of discussion surrounding public spending that solely addresses “how much,” rather than “is there a better way,” does not serve the public well or their general wellbeing.