Home Thoughts and Musings Mushy in the Middle 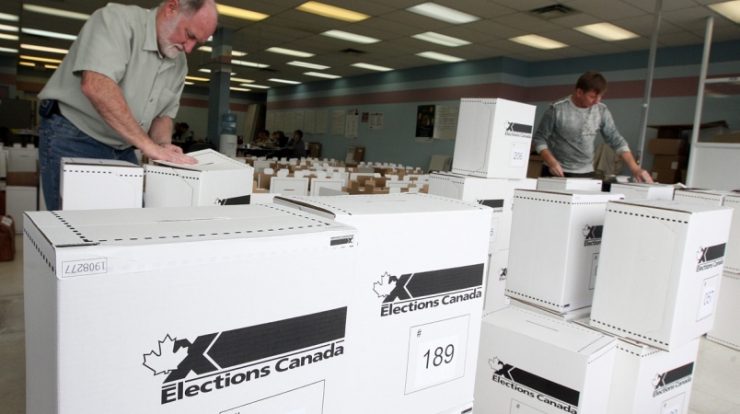 It’s a common lament when Canada goes to the polls, whether federally, provincially, or municipally.

The parties are all the same! Why bother picking one? There’s hardly a difference between the federal Liberals and Conservatives!

And yet, the parties seem so intent on convincing you that they’re not just different, but  miles apart, worlds different, and what is at stake this election is the very soul of the country.

This, of course, is not true.

That’s not to say there aren’t better or worse candidates in any given election, but the decision is never between a baby-eating monster who wants to send the old, weak, and infirm to the glue factory and a freedom-eating socialist Stalin who wants to raid your bank account and cripple our economy.

So why are they so intent on convincing us of this? Why isn’t there more difference between our candidates?

For that matter, why do the candidates outside the political mainstream increasingly feel the need to distinguish themselves so strongly? The NDP, the PPC, and the Green Party all have policy proposals that many in the middle find simply too far beyond the pale.

So we have banality in the centre, and some would argue radicalism outside of it. Why?

It goes back, once again, to our electoral system.

Blaming all of this on First Past The Post might seem like an oversimplification. It is. But FPTP lays the groundwork and establishes the incentives that create our current situation. It can’t explain the particular flavour of our bland, mushy political middle and thorny outside, but it tells us that’s what we’ll get.

Why? How? What can be done?

First, the why. I’ve dealt with the history of FPTP already here, and won’t go into all of it again. What you need to know for now is FPTP is a stabilizing force in politics. It reduces the chances that outside parties can break in, and requires any political newcomers to essentially step into the shoes of one of the two major parties (Liberals and Conservatives, obviously).

I’ve dealt with “how?” as well, but here’s the skinny. A plurality system like ours raises the threshold of support any newcomers need to gain to break in, in any meaningful sense. The major parties glom up an outsized amount of political power for the support they receive.

So, we have a system where newcomers have to disproportionately defeat major, established parties to gain meaningful representation, and where the major parties thereby gain outsized amounts of power — a disincentive for voters to move away from them. The odds that your vote will push your candidate over the top are reduced. Your vote is more valuable when it’s being given to a major party.

How does this get us our mushy middle? Well, since two parties take it in turns running the country, and voters are incentivized to go for one of them, that means parties have to constantly widen their appeal as much as possible, and the inherent voting disincentives protect them, to a certain extent, from voter abandonment. With no viable alternative, you’ll take a watered-down version of your ideas over the enemy. So parties broaden as much as they can since, realistically, the only team they can take from is the other team.

This is also what drives some people to other parties. Increasingly frustrated by the apparent sameness of the major parties, they turn to anyone who they feel more closely represents their interests. As time goes on and they feel increasingly disenfranchised from the political process, their threshold of acceptability lowers. They’ll be more and more willing to accept candidates that propose increasingly radical or disturbing ideas, as long as some of their closely held beliefs also get some air time. Parties will seem to emerge out of nowhere with some very different ideas than anything you’re used to hearing, but never really get anywhere

The second half of this equation is the enemy factor. You may have noticed outright hostility throughout this campaign. Campaigns often, if not always, turn nasty, but this one is especially savage. Old videos of Andrew Scheer bumbling his way through a gross comparison of gay marriage with treating a dog’s tail like a leg? The Conservatives pouncing on a conspiracy theory that Justin Trudeau had an affair with a student when he was a private teacher? This isn’t just because politicians are ruthless, cutthroat people. Parliament Hill employees don’t dose them with LSD and make them watch dog-fighting videos to get their bloodlust up. It’s because there are incentives to do it. They are motivated, by our system, to be as vile and cutting as possible.

It goes back to our functional two-party system and the mushy middle. Each party is trying to poach, essentially, from the other one. The fact that they’re so similar is dangerous to each party; voters could switch sides fairly easily, with a tweak to a policy here or there, since the policies start out so similarly. So, parties, to protect their voter base, have to convince their voters that the other side is the actual Devil, and is out to destroy everything they hold dear.

And there you have it. Nearly identical parties busily trying to convince everyone they can that the other guy not just shouldn’t be in charge, but cannot be in charge, for the good of the country.

This is what made Justin Trudeau’s promise to reform the electoral system so important, but so unsurprising that it didn’t happen. His government pointed to a general apathy as their reason for not going ahead with it. The general apathy bit is almost certainly true. It may be important, but it’s also a tedious bit of wonkery that most people can’t be arsed to care about. That doesn’t whatsoever justify not changing it, but the truth is it’s not in the Liberal Party’s interests whatsoever to change it. Like it or not, the electoral system keeps the Liberals and Conservatives, if not on the same team, at least opposed to everyone else. They both stand only to lose if the electoral system changes. This isn’t politics, it’s economics. Asking one of the major parties to change the system is asking them to sacrifice themselves for the good of the country. It makes no rational sense for them to do it, unless the penalties for not doing it are worse, which would be a tall order of circumstances.

Until  Canadians decide that electoral reform and the ultimate sameness of the two major parties is a serious enough issue and that we will raise absolute hell if it doesn’t change, we’ll have to settle for our mushy-in-the-middle politics.