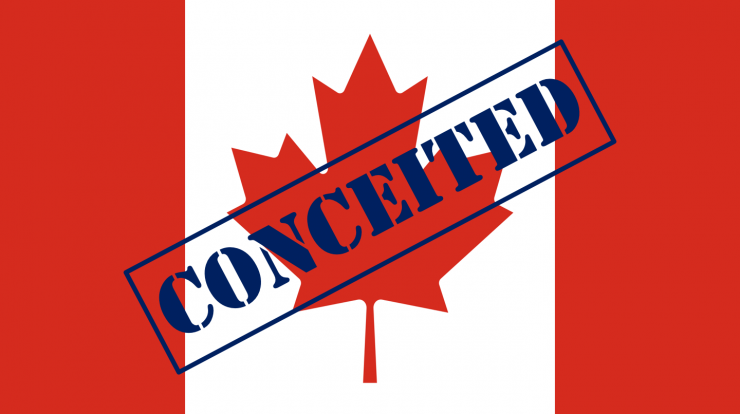 That’s what you’ll hear a lot of people in the Great White North going on about.

Whether it be the “Florida Man” stories, something counterfactual the President himself states shamelessly, or a Texas lawmaker calling vaccines “sorcery,” the big neighbourhood of nearly 330 million to the south seldom disappoints when one searches for shock value and stupidity; the kind of stuff that makes you shake your head — with a smile at certain times, and with a worried look at others.

Many Canadians who have, let’s say, an average interest in politics or related topics — the kind of people who don’t enjoy any political discussion that goes beyond mainstream party politics or lasts longer than an hour — tend to wrongly feel that because a certain problem in Canada isn’t “as bad” as in the U.S., that it isn’t a problem at all.

And that’s where a lot of Canadians stop thinking about a certain issue and put it to bed.

A lot of Canada’s extreme political and cultural troubles feel like fringe issues to most. Sure, many would say, we may hear about weird Canadian anti-Islam and immigration groups that meet in rural areas and practice military style drills, but these kinds of things tend to be off to the side up here — in America, they have crazy riots and far-right groups marching around with guns and causing trouble in cities, and that wouldn’t happen here!

It is exactly there that this kind of conceit can become fatal. It’s too easy to look at how things are up here, decide they aren’t as bad as down there, and conclude that they can’t possibly get worse.

It’s plain to see that we are not approaching the point where mainstream issues are being infected with dangerous illiberal tendencies; we are at that point. Political movements that purport to be strictly about issues like economic hardship or other standard concerns are now easily infiltrated and stained by people with disgusting attitudes — including unabashed racism and xenophobia.

I call these things tendencies and attitudes specifically — not opinions or agendas — because one is hard-pressed to find anything of substance in terms of principle from the folks who froth at the mouth calling for Justin Trudeau to be “tried for treason” or assassinated, or the kind of people that base their anti-immigration stance on perceived affronts to their personal preferences and comfort-zones, which they masquerade as “Canadian values.”

Canadians taking comfort in their own bubbles while destructive and destabilizing forces inch toward them is not a recipe for success, but many operate as if it is. Attitudes that: encourage racism; cause you to look at people who believe in a religion you disagree with as inhuman; push political discourse from principles and issues towards angry complaints and preferences embodied by demagogues, are festering wounds — they can’t be ignored. They must be carefully assessed and treated with the proper medicine.

The proper medicine is to have standards you are prepared to enforce. The easy way out of any form of political or social responsibility is to resign oneself to the idea that everything is terrible and that, no matter what you do, not much can be improved anyway. One person ignoring politics and vacating their mind of any concern for public discourse is hardly cause for alarm, but when thousands and millions take up this attitude, we have reached a higher tier of trouble. If most people don’t concern themselves with these issues (because of their understandable disgust towards nonsense), they aren’t participating in setting the standards in which public discourse addresses them. That leaves the standard-setting to the fringes, and we can predict just how high those standards will be.

It is within the ability, and responsibility, of each of us to directly affect the standards and attitudes we want to see around us by maintaining our own at a high level. The fact that so many Canadians are passive about many issues, but can’t connect that with the idea that that very attitude could be a contributing factor in the easy-rise in popularity of extremely horrendous beliefs and viewpoints, is astonishing.

Canadians cannot sit idle and pretend that their mainstream political arena is invulnerable to instability, indecency, and dangerously illiberal attitudes. You only have to take a look at social media to see that the roots of extreme indecency, lack of sympathy, and anger have taken a firm hold with tons of people that go beyond the occasional oddball. To see people who list themselves as “Dad to two daughters and Calgary Flames fan” producing a caps-locked and curse-worded tirade about how they hope for the day that certain Canadian politicians get assassinated is unsettling.

Donald Trump’s rise to the White House was not the result of his children conducting some witchcraft in Trump Tower. As he gained traction in the primaries, became the Republican nominee, and then went on to become President, there were millions of people who supported him. For many, this support wasn’t based on any specific policies, but on his embodiment of tendencies and attitudes they related to. Most of the media spent their time nervously laughing at the very idea that he could become President, rather than seriously considering it.

Active or Passive Capitalism? Not Much of a Choice

The Tricky Business of Violence

It’s About Control, Not Liberty