Home Thoughts and Musings Who’s Too Short to Be President? 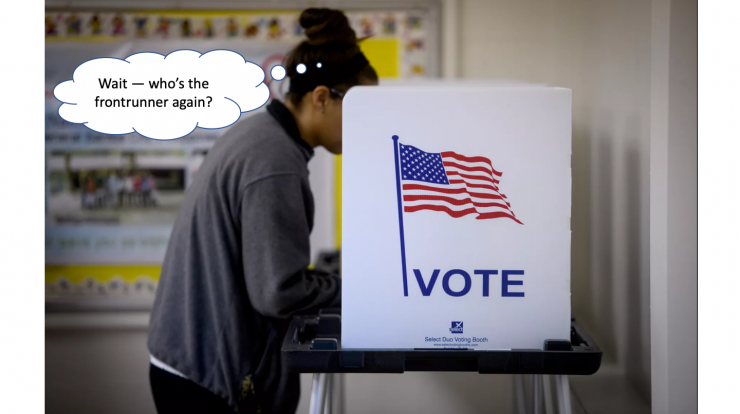 Welcome to your morning newscast.

Today’s top story: Did you know if you’re less than 6 ft. tall, you can’t be president? Who knew?

Canada is crawling uncertainly, as it always does, into an election year. Meanwhile, the mega election reality show that is the United States starts to grind its diesel engines to croaking, lurching life with an election race still over a full year away.

Let’s take a moment to appreciate the Washington Post getting into full election swing by suggesting that Beto O’Rourke is a tall lad and therefore a decent candidate to be president. It was characterized adorably in the headline: “Beto’s towering advantage.”

Going into the next round of elections, where many of us will do our damndest to avoid voting because there’s no candidate we really like, let’s agree to do something: Let’s not boost or torpedo candidates based on perfectly arbitrary characteristics — or assume we can assess their politics based on their teenage prose and poetry.

That goes for the campaign press, who doubtlessly read this article with bated breath and inflamed colons, since they’re really all sitting way too much. But it also goes for you, dear reader. If you come across this sort of goofy thing, carry on your merry way. Don’t even open it. The business of news is banking on those clicks, and they mean more than you might think.

The very concept of “electability,”  or lack thereof, based on superficial traits is an illiberal one. It is reinforced in the U.S. by the fact that if you’re running outside the two-party system, you are in fact almost certainly doomed.

Predetermined electability (especially by the press) defies the very premise of voting. It says that choosing your prefered candidate isn’t a decision you make, but is made only as a collective before the election — your vote and opinion don’t matter, but your neighbour’s does.

The political system isn’t doing you any favours. North American voting systems entrench parties in power and mathematically limit the ability to challenge them. So don’t think I’m blaming you: quite the opposite. Long-term change means altering the election structure, but let’s take this one step at a time.

The natural counter-argument here is: “But we’re keeping dangerous and irrational radicals out of our system by calling them unelectable. Isn’t that a good thing?”

That statement can be true. At best, it’s true incidentally. The reality is, electability is inherently a non-policy judgement. The merits or demerits of policy become irrelevant. All we’re looking at is: What will most people think about them?

So no, we are not merely keeping dangerous and irrational radicals out of our system by worrying about “electability.” If those dangerous and irrational radicals package themselves in a way that’s comfortable to us, they will pass the electability test. If people with very sensible and well-thought-out ideas fail to present them well, or don’t “look the part,” they might not pass the electability test. And don’t forget that the current president was heavily televised because everyone thought he was a joke — assumed inherently unelectable. Nobody took his proposed policies seriously while they could. How did that turn out? He took the very concept of electability and crucified it. He certainly didn’t intend to, but he did us a favour in stripping away the illusions many of us have about the electoral system.

So, this election cycle, even though the system is already conspiring against you and telling you who the “front runners” are, make an effort to forget the word electability — tell yourself who your front runner is, and know why they deserve that.