Home Thoughts and Musings Regardless of Intentions, Jody Wilson-Raybould Has Done Canadians a Favour 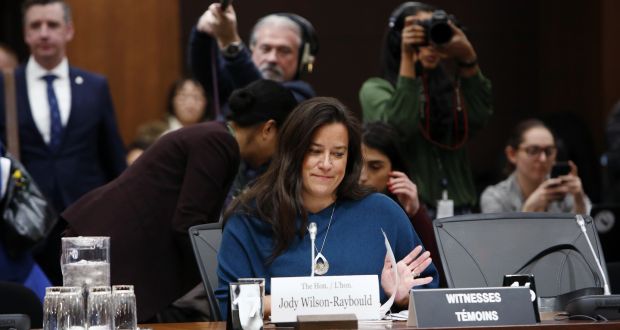 It was four years ago that SNC-Lavalin, the Quebec-based engineering and construction giant, was charged. Officials in the company allegedly bribed Libyan officials and members of government, including the infamous Moammar Gadhafi, and defrauded Libyan companies of over $130 million. Allegedly, hinky behaviour by various people associated with SNC-Lavalin go back further.

The company has sought a Deferred Prosecution Agreement (DPA) as a way of avoiding a mandatory 10-year ban on bidding for government contracts were it to be convicted. DPAs only became an option for prosecutors in Sept. of 2018. The long and short of it is a DPA is a way for government to compel action of a corporation without recourse to the courts; the company, in turn, is typically required to either pay a fine or submit to some kind of oversight, or both. Making use of it requires the assent of the Attorney General.

DPAs entered the public consciousness when former Justice Minister and Attorney General Jody Wilson-Raybould said she was inappropriately pressured by the Prime Minister’s office and Prime Minister Justin Trudeau himself to use a DPA for SNC-Lavalin. She declined to. She was later moved to another cabinet position, which she says she felt was because of that refusal; the PMO and Trudeau disagreed, saying it was because another cabinet minister had retired and forced a shuffle. Wilson-Raybould and others testified before the parliamentary justice committee — the ethics commissioner is investigating as well.

After testimony from Wilson-Raybould and others connected to the issue earlier this year, a recording was released on March 29. Wilson-Raybould had recorded a conversation with former Clerk of the Privy Council Michael Wernick.

Some additional quick hit info on what DPAs are in Canada and how they work can be found here, and you can read the transcript and listen to the call here.

The Liberal Party line seems to be a mix of questioning Raybould’s credibility and “ethics” by calling attention the fact that Raybould recorded someone without their consent (at least one non-politician lawyer is raising this point as well) and doubling down on the claim that the tape actually plays into Trudeau’s favour even further by confirming that “nothing illegal took place” — underneath all of this, they keep reminding us that their only concern about SNC-Lavalin is because Canadian jobs  could be at stake if something were to happen to the company.

Conservative Party leader Andrew Scheer is, of course, saying that this is “concrete” proof of Justin Trudeau’s “campaign” to politically interfere in SNC-Lavalin’s criminal prosecution, and that he has lost the moral authority to be Prime Minister of Canada and must resign.

As for me, I’m going to do something that other folks who feel that Justin Trudeau and his office conducted themselves in a rotten way when it came the Raybould/SNC-Lavalin affair wouldn’t do.

Let’s say Jody Wilson-Raybould is the farthest thing from a political hero — that she’s using this scandal and issue as her own lifeboat off of Justin Trudeau’s ship for absolutely self-centered career reasons, and that she doesn’t even believe that there’s anything inherently wrong with the government hoping that some form of a deferred prosecution agreement comes down the pipe for SNC-Lavalin.

Let us also say that Justin Trudeau and his team are people with the best intentions in their heart — the best Prime Minister and government Canada could ever ask for — and that the only thing on their list of concerns with SNC-Lavalin is doing all they can to make sure that any negative outcomes for that corporation or their executives never result in job losses or economic hurt.

Now, even assuming all of that, the Raybould tape clearly reveals a few key things:

What both sides of the conversation agree on implicitly here is the government’s — specifically the Attorney General of Canada’s — ability to get involved to some degree in the criminal prosecution of a corporation (and/or its executives) under the authority of certain parliamentary directives, and influence a criminal procedure with a certain set of “tools.”

Again, even assuming that Raybould is just a great actor who couldn’t care less about this conundrum, she still brings to light the question of what the government is legally permitted to do versus what is right or “just” for the government to do — and this is the crux of the matter that everyone with an opinion on this issue seems to be talking around.

Whether you take the Trudeau angle that there’s “nothing illegal” or wrong here or the Scheer angle that this is a case of behind-closed-doors corruption where the Prime Minister is in fact pressuring the Attorney General to do the unethical and get “SNC-Lavalin off of serious criminal charges,” no one disputes the facts that: Canada has deferred prosecution agreement tools available to prosecutors to work with in corporate criminal law, the Attorney General must consent to the negotiation of these agreements, and that this would necessarily cause conversations among government officials as to when it would be appropriate for these agreements to be signed off on by the Attorney General of Canada.

The Attorney General isn’t part of some impartial oversight committee established by Parliament. The AG is ultimately an elected politician who, fundamentally, works in the legislative arm of Canada’s affairs — unlike the criminal prosecutors, judges, and courts that make up the judiciary arm of Canada and are supposed to maintain a separation from politics.  A Prime Minister must choose people to fill Cabinet posts from a pool of elected Members of Parliament; the public doesn’t have a direct say in who fills the position of Attorney General or Justice Minister — individual ridings have a say in who they send to Parliament and that’s where it ends.

In a nutshell, when it comes to a DPA, the final say (or influence on prosecutors) on whether or not a corporation and/or its executives can avoid criminal prosecution is one that by design sits in the realm of politicians, and therefore, incentives that are ultimately political.

The entire arrangement is, in principle, leaving the door between politicians and the rule of law ajar for some conversation and influence between the two sides. It shouldn’t be a surprise that we now have a scandal and public discussion at hand that addresses whether or not a party (or Prime Minister) in power is trying to push on that door for the wrong reasons.

Again, even with the assumption that Justin Trudeau and his inner circle are angels who only wish to pursue a DPA for SNC-Lavalin for concern over job losses or economic hardship (and not his election prospects) it should give everyone pause to note that both of those reasons have absolutely nothing to do with bringing justice to those accused of certain crimes.

And, again, even with the assumption that Jody Wilson-Raybould couldn’t care less about the ethics involved here, she has done us a favour by releasing an unedited display of the kind of conversations that can and will happen behind closed doors with the current DPA directives and legislation in place. Well-paid politicians will discuss among themselves when it is the right time to make the call as to whether or not well-paid executives and established corporations can avoid criminal prosecution for reasons that have nothing to do with the charges brought against them (e.g., “jobs”).

Any case being made that these kinds of criminal prosecution avoidance options are for the benefit of all Canadian business owners would be a weak and silly one. It is safe to say that the chance a small corporation (say, under $2 million of revenue) has of getting a DPA if it runs into legal trouble would be dwarfed by the size of chance an SNC-Lavalin, Bombardier, or the like would have.

So, with big corporations and big government issues, justice necessarily becomes a political conversation with DPAs.

Jobs, the economy, election prospects, political parties, cabinet shuffles, public perception, opinion polls, news coverage of the government — these are the kinds of things that will necessarily be circulating in the minds of the human beings that have influence on whether or not a corporation can or should avoid criminal prosecution.

Canadians should be asking themselves — are those the kinds of things you want incentivizing them during these kinds of decisions? Are these the right people to be making these decisions?

*Although we have not investigated further into the “sources” of information the Liberal Party has access to that are connected to insiders at SNC-Lavalin, we have no problem assuming that at the very least this should raise another eyebrow on the idea that there is a detachment of politicians and their operatives from relationships with influential corporations and how this influences process.

Connor Lynch contributed the introductory background and summary of the SNC-Lavalin case found at the beginning of this article.