Home Thoughts and Musings You, Me, Facebook, and Free Speech 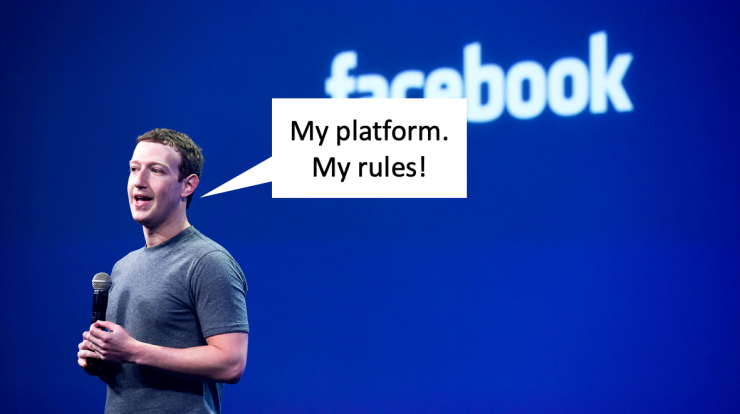 When it comes to the issue of free speech and how it relates to social media platforms like Facebook, there appears to be two entrenched camps.

On one side, you have folks that excitedly rush to point out that Facebook is a private company, and by virtue of that, it has the right to arbitrate what kind of speech (content, messages, stances, etc.) is allowed on its platform.

On the other side, you have folks who don’t accept this premise. Since so many people use Facebook as more than just a platform for dog and cat videos, they argue, it shouldn’t be so easy for the company to pick and choose what appears on it. From this stance has come many proposed solutions to the alleged problem — I’ve seen everything from the idea that Facebook should be monitored by the government and fined if they don’t have a “fair” amount of content from all political views, through to the proposition that they should be directly regulated by federal government agencies.

In principle, believers in free speech should also recognize the principle of freedom of association (and with that, the right of private entities to control how their products, platforms, etc. are used if they choose to).

But, that mere fact that something is someone’s (or a company’s) right should not by itself put a legitimate stop to this conversation, nor does it completely delegitimize the concerns voiced by those who think that Facebook wields too much censorship power — even if we think their proposed solutions are misguided for reasons of practicality or principle.

Whether you or I, dear reader, think it is a good thing or not, the fact remains that certain research and polling shows that around 68% of adults in the U.S. say they get their news from social media (Facebook takes 43% on its own). Any avid user of Facebook (odds are that you are one) is familiar with the rapid rate at which headlines and updates appear in a user’s feed, and how often most people take them at face value after, literally, a glance.

Couple that with the not-so secret that Facebook aims to put content in front of you that you are more likely to agree with (how else are they going to demonstrate that it’s worth buying ads from them?), and it’s not that hard to understand how Facebook can heavily influence the worldview and opinions of its users.

If the ability to completely control what appears in front of you gives you a bit of an odd feeling about social media and Facebook, then the ability of these companies to control what can’t appear to you should irk you as well. Again, the fact that they should be allowed to do so doesn’t eliminate the concern that they do, and how they do it.

Those worried about public power (i.e., government) exerting control on what information citizens can access and how it influences them — like in China — should not, on the other hand, be so passive about private power. Those who are willing to give private power a pass while remaining skeptical of government power are, unfortunately, more concerned with who wields that power, rather than the concentration of power itself.

Conversely, those who are all too willing to preach about the benefits of government influence on the type of information made available to the public are mistaken as well — no matter how well intentioned they are in their quest for “fairness.” The proper approach is to be skeptical about any structure that would deny you the information you seek.

This is certainly not a call for some sort of legal action against Facebook or any other social media platform. They have a right to run their platform as they see fit. If you’re a Nazi and have your views censored from the site under a zero-tolerance policy, you can’t cry foul on free speech.

However, anyone cheering about the censorship of certain views that they just so happen to disagree with, take note that this doesn’t mean free speech for you and not for others; your speech just happens to be accepted speech on a private platform — for now.

Ultimately, social media censorship isn’t free speech violation in truest sense, and we should remember that it’s a great thing that governments of countries like Canada and the U.S. haven’t (largely) ventured into the dangerous and unacceptable precedent of telling private entities what kind of views they can host on their platforms and who they should be associating with.

However, it’s 2019, and it’s important to recognize that millions of people use online platforms like Facebook as their main tools for political discussion, speech, activism, sharing of news, and political opinion, and even organizing political action. This means that Facebook has accumulated a lot of power over the voices of millions — all under the arbitrary power of their terms of service.

This issue isn’t cut and dry.