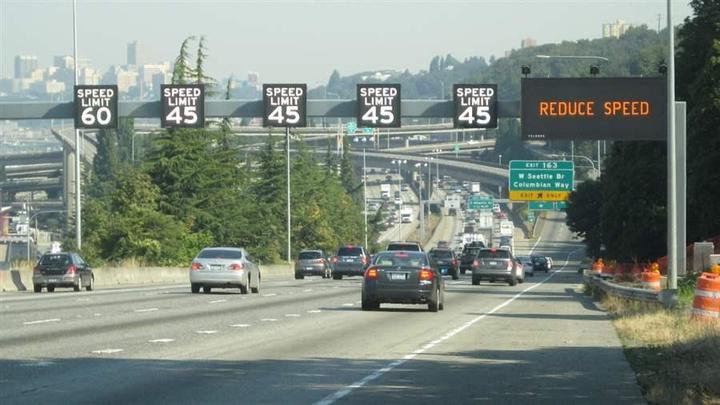 Don’t worry. I’m not talking about minimum and maximum sentencings in criminal proceedings – a topic virtually guaranteed to provoke unpleasant arguments over the dinner table. This should provoke some much more pleasant arguing over any family gathering of your preference.

Maximum and minimum speed limits on highways are not only good public policy, but ought to be on an automated sliding scale that changes based on the average speed of all drivers on specific roads. They would be more democratic that way, bizarre and counterintuitive as it may sound.

Why have limits in the first place? Some would say that a reasonable society can trust experienced drivers to set their own limits.

Of course. But what about those inexperienced or reckless drivers? Should we simply accept they will exist and leave them to wreak havoc amongst the other drivers? Surely not. They do not risk only themselves when they drive on public roads, so public concern is warranted and reasonable.

So, the question becomes, what is the best way to manage the risk to the public without needlessly restricting other drivers?

Some may argue that reducing maximum speed limits, rather than letting minimums and maximums emerge as a function of drivers setting their own limits, would be a more effective public safety policy — the slower the better. This is misguided; a lowered limit has no guarantees that drivers will comply with it, especially if it is at odds with what most intuitively feel is a reasonable speed. As well, the main concerns for safety are not outright speed – since most people will not risk their lives for a few minutes shaved off the work commute – but deviation from the norm. A single speeder or geriatric puttering along in the passing lane can create havoc for dozens of other motorists.

Similarly, minimum limits may not seem necessary, and even look counter intuitive. They may not be necessary, but at worst are harmless; at best, they encourage unnecessarily slow drivers to speed up, once again reducing that deadly deviation.

Hence, monitoring on roadways ought to be set up. Most authorities already use the 85th percentile (the average speed of 85 percent of drivers) to set their limits. Give a range above and below, say 10 km/h each way, and the majority of drivers will cleave approximately within that. Most places set upper limits, but few put minimums, even though the greatest danger is not going too fast but deviating from the average speed.

Using both upper and lower limits will reduce major deviation from the average speed, vastly reducing the greatest danger drivers will face from their fellow motorists. Police enforcement would not only limit itself to reckless speeders, but also dangerous lane blockers.

An argument can be made for a tighter variance since deviating 10 km/h above maximums or below minimums is not uncommon for most motorists — that puts a driver 20 km/h away from the ideal speed into the middle of an exponentially increasing curve of increasing risk of accident. But it’s not clear that drivers would obey a tighter limit, and a singular limit (a minimum and maximum set at the same speed) might provoke disagreement on the absurd face of it — as it often does now.

Automating the process would not only make it more efficient, flexible, and able to adapt as drivers adjust their driving patterns (say,  seasonally), but also makes the speed limit a democratic function — the limit would always be what the majority of drivers consider a safe speed. It would remove busy work from roads engineers, letting them focus on other factors that can’t be assessed by an automated system when adjusting limits.

It can produce what would seem like some unintuitive results. Average speeds tend to increase, not decrease, and constantly sliding speed limits upward can seem like a counterintuitive result of a measure designed to increase public safety. But drivers who find they’re speeding up aren’t likely to obey a lower limit, and raising the limit will reduce the problem of variance.

When it comes to speed, of course, Germany’s Autobahn comes to mind. Without speed limits for most vehicles, it has an accident rate about half that of the average U.S. roadway. Most of its accidents occur on sections with posted limits, which weakens the argument for no limits at all. Germany, of course, also guards its roadways with sensible safety measures, such as making it illegal to pass on the right.

Meanwhile, the New Jersey Turnpike does not use the 85th percentile rule to set its limits. It is also one of the most dangerous areas of road in the state. One reason cited for the dangerousness of the road is the aggressiveness of drivers. Another chronic problem is the Jersey Sweep, where a driver will remain in the fast lane as long as possible and then sweep over to the rightmost lane to exit the roadway. A law firm in the area recommends not exceeding posted speed limits, however tempting. Though distracted driving is oft-cited, aggressive driving and road rage are cited as well. A limit set below what drivers would consider a natural limit might be a factor.

An automated 85th percentile system is perhaps one of the few cases where an approach guided by experts and research and implemented by faceless technology can enhance democratic engagement, rather than reduce it. Happily, drivers can set their own limits, guided by their own reason and judgement, and public safety can be improved with most drivers not even noticing any barriers to their driving.