Home Thoughts and Musings Taking Our Jobs? At Least Someone Is 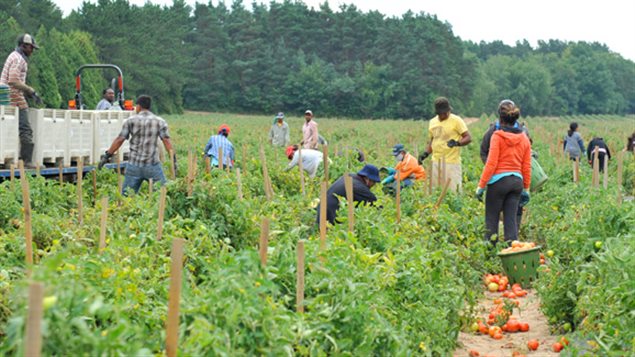 It’s not a well-known fact, but in the United States and — to a certain extent — Canada, getting crops from field to fork and products from factory to shelf relies on a class of people that are not citizens.

The U.S. Department of Agriculture estimates suggest that about half of all farm workers are illegal immigrants. In Canada, the mechanisms are superior, in some ways: The Foreign Agricultural Worker Program and Temporary Foreign Worker Programs bring hundreds of thousands of workers to fields across the country, allowing them to work here legally and providing them shelter and certain rights, including being paid minimum wage. They do not include paths to citizenship.

There is always economic desire to expand access for unskilled immigrants into the United States; equally so, to expand the foreign worker programs in Canada.

But those desires are equally permanently quashed, with the tide of public opinion seemingly only ever rising against further access for immigrants. The arguments against seem simple and understandable. Why are foreigners being brought here to do work when people here are unemployed?

These arguments are fallacious. Even in a system that meets work and workers as efficiently as capitalism, there will, at times, be that failure to connect. But the arguments also run headlong against arguments of economic nationalism.

The difficulty, and seeming contradiction, is because the underlying principle is faulty. The fault is that it does not exist. Arguments against greater participation by foreigners in the economy rely on emotional appeals to economic nationalism. That same economic nationalism strives to preserve industries that often rely on foreign workers.

But economic nationalism is a hollow principle. If we see the efficient allocation of labour as the desirable product of capitalism, we have a moral, as well as rational, principle to let those hardworking souls willing to till our fields and build our products in, and welcome their contribution rather than shun them for being born in the wrong part of the world.

First and foremost: The concept that employing foreign people is immoral when people here need jobs. Simple enough, on its face. However, what is the solution? Should people here be forced to work the fields?

In Canada, an employer looking to hire a foreign worker has to post the job on a national job board and advertise for it.  You may also need to fill out a Labour Market Impact Assessment. Many employers are obligated to provide housing for their employees.

How immoral must these employers be, to go to such lengths to avoid hiring a Canadian or American? It is no easy feat to bring a worker from Jamaica or Mexico to this country. So, why bother?

Canadians and Americans don’t want these jobs. They have superior alternatives — a worker who spends 15 hours a day working a field in hot weather doing physical labour can get an air-conditioned job at a McDonald’s and make the same money.

Getting Canadians working the fields when they otherwise wouldn’t would entail forcing them into it. Without access to workers, of course, the farms, companies, and industries reliant on them would fail.

Thus, the problem of economic nationalism. Many believe that there ought to be certain industries in certain countries. Agriculture is a common one, but really, pick one. Most of the time, it’s just an industry that’s been here for some time. Take the United States; the slow death of the coal industry gave Donald Trump clout, thanks to promises to resurrect it. But America’s entire coal industry employed a fraction of the number of employees of any given individual retail company. The loss of the coal industry devastated some communities, but it was hardly the national crisis it was pitched as.

Even more saliently, saving coal is beyond anyone, no matter how large and powerful his nuclear option or extravagant his rhetoric. The industry is dying. Industries die. It is a healthy thing in an economy. But coal’s bloated corpse, if kept on life support, will bloat and fill with noxious gas, and its inevitable explosion after continued agony will be all the more unpleasant for it.

Letting it die would be good. But coal is one of those national industries. Its death perceived as a loss of identity.

Thus, the problem. These national industries must be saved at any cost. The cost, as it turns out, is often employing foreigners. The two issues, politicized as they are, run into one another in an uncomfortable way.

The solution is easy. Smooth access for foreigners to our economy based on our needs, and let industries die. No industry is necessary to our national identity, or even to our security in a modern economy. In the modern, connected world, we have a chance like never before to make capitalism even more efficient. Let the fertile soils of the world grow food for all of us; save the mountain regions for mining, though ideally not all of them.

A capitalist economy within a country thrives on efficient distribution of labour. A modern, global economy can do so much more, if we’d only let it.