Home Thoughts and Musings Rise Up, All Who Are Oppressed! 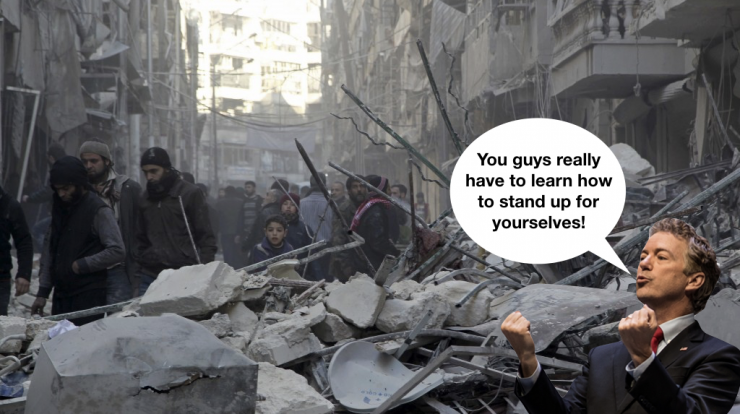 When President Donald Trump announced that he would pull American troops out of Syria, Rand Paul, republican senator from Kentucky, applauded the news with typical non-interventionist talking points.

“It should not be the job of America to be replacing regimes around the world,” said Paul who, at that point, was off to great start.

″What we’re doing in like seven different war theaters right now is unconstitutional and we shouldn’t be doing it, but I did support going in after 9/11, but I have not supported the nation building.”

“Aren’t these people going to stand up and now fight for themselves? Can they not do anything?”

It is here that Rand Paul had spoiled what could have been a perfectly good and well-rounded point.

There are a lot of reasons to reject American military involvement and policing around the world, including the point he does make that it’s not America’s job to decide on every regime change and get involved in every world conflict.

However, Paul (and many others I have seen) insists on capping off this point with some sort of odd call to action, verging on accusation, aimed at those persons that the American armed forces have been sent in to defend or help.

The idea that these people should essentially figure it out or take care of things themselves is meant for cheap political points and carries problems with it from two angles.

Firstly, the idea comes with some weird form of contempt against those that, we were often told, really needed help in the first place, and it implies that they either feel apathy or non-appreciation towards those helping them. It also ignores the fact that, most of the time, those very people are recognized as victims who could do nothing else but hope for some exterior force to come help them. All of which leads me to the second angle.

Paul’s question is obviously rhetorical and meant to imply that foreign peoples need to help themselves. Although we are used to the idea that a United States politician can be sloppy and simplistic with their words, we still must ask the question seriously: Can these persons fight for themselves?

The persons being addressed in this specific example are the ones against the Assad regime in Syria, but this sentiment of “help yourself” is often repeated by many who fancy themselves either anti-war or anti-interventionist.

The idea that it’s about time victims stand on their own feet and face their own injustices does not get a pass from the lens of reason. It’s lazy, and begs the question by assuming that the people up for discussion actually do have the capability and means to resist the injustices they face or the terrible forces against them.

Perhaps I don’t have enough faith in the strength of the resolve that the Syrian people possess against the Assad regime, but I find it hard to follow up the images of families who have fallen victim to chemical weapons with the idea that “it’s time to pull up your bootstraps and stick up for yourself!”

Mr. Paul, on the other hand, seems to feel comfortable with throwing around the idea that folks living under a totalitarian regime should figure out a way to help themselves. Perhaps he takes a little too much for granted living and working in a country where a citizen’s right to own weapons is enshrined in the constitution, and has a military force with a budget exceeding half a trillion dollars under civilian control.

Syria is a specific case where the average person, unfortunately, has not been presented with the unique historical circumstances that make it possible for a population to have a proper revolution.

I am betting that it isn’t going to be the scene of a declaration of independence and noble overthrow of the powers-that-be in the name of the principles of liberalism. The Assad government’s clampdown on the nation echoes Saddam Hussein’s in Iraq with its disregard for human life, especially that of civilians.

Rand Paul is arguing in good faith when he makes his case against American involvement in regime changes or other foreign affairs. Even if his stance is that no matter how bad things get anywhere in the world, it is not America’s job to intervene. One may disagree with him, but this can at least be called consistent by its own logic.

What he doesn’t get a pass on is having his way with the facts; cheapening the plight of human beings facing tremendously dire circumstances of war and chaos, and ignoring the circumstances, realities, and incentives they face.

We don’t live in a 1980s movie where the underdog just needs to get that one good punch to claim victory against a bully. We live in the real word, where a revolution styled after the American one is not an option that a chemically-burnt Syrian widow has, as she wonders about her baby’s next meal.

Rand Paul and people who parrot his statements should remember that — if their goal isn’t to come off as obtuse.